A poisonous plant is one which, as a whole or a part thereof, under all or certain conditions and in a manner and in amount to be taken or brought into contact with an organism will exert or cause death either immediately or by reason of cumulative action of the toxic property due to the presence of known or unknown chemical substance in it, and not by mechanical method. 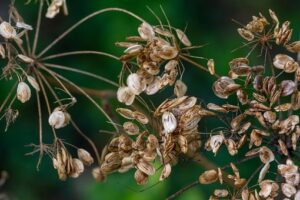 1. Heracleum canescens (also called as Grey-Hairy Hogweed, Pushki) is found in the central western Himalayas at altitudes of 2300m asl. The sap of Heracleum species contains photosensitizers that cause contact phototoxic dermatitis: a family of photocytotoxic compounds called furanocoumarins. The highest levels of furanocoumarins, including angelicin, are found in hogweed leaves but are also present in its stems and inflorescences. Furanocoumarins confer an ecological advantage to the plant, as they possess both insecticidal and antimicrobial properties, thus protecting the plant from pathogen and insect attack. In mammalian cells, exposure to furanocoumarins causes both carcinogenic and mutagenic changes by virtue of their unusual ability to intercalate directly into host DNA. After integration into the host DNA, exposure to light energy can result in further collation of these bioactive tricyclic molecules which then undergo additional reactions with pyrimidine bases on the complementary DNA strand, giving rise to inter-strand crosslinking. Cross-linking within the DNA strands induces apoptosis and inhibits further cell proliferation. Besides these, it is also traditionally used as food additives, spices and flavoring agents. Moreover, these plants are widely used in folklore medicine for the treatment of many disorders such as inflammation, flatulence, stomachache, epilepsy, psoriasis, and as carminative, wound healing, antiseptic, anti-diarrheal, tonic, digestive, pain killer, analgesic, and anticonvulsant agents.

2. Delphinium brunonianum (Musk Larkspur, Makhoti) is a highaltitude plant, found at 4300 – 5500m asl. It contains diterpene alkaloids viz. aconitum and delphinium that have been used mainly for preparation of a wide spectrum of poisons as well as medicines for many centuries. Extensive biological and pharmacological studies performed have shown that delphinium alkaloids affect substantially the cardiac and central nervous systems. Thus, at present, a number of diterpene alkaloids have been identified that exert analgesic, anti-inflammatory, anti epileptiform and cardiovascular effects. The high toxicity of various species of Delphinium plants is attributed to the norditerpenoid alkaloids present. These plants still continue to be the main cause of extensive cattle poisoning resulting in substantial losses for the cattle breeding industry. 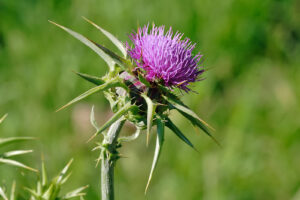 3. Silybum marianum (Milk thistle, dudhpattra) is found at high altitudes regions of Himalayan states. Its leaf sap contains silymarin toxins that may cause allergic skin reactions, bloating, blood clots, impotence, itching, nausea, non-specific muscle and joint effects, sexual dysfunction and vomiting. Reported cases observed with cattle and sheep poisoning with ingested plant material, which contains potassium nitrate that combines with haemoglobin to form methaeglobin that lead to incapable of to combine with oxygen and ultimately may cause respiratory distress. Its milk thistle extracts also have been used as traditional herbal remedies for almost 2000 years. The extracts are still widely used to protect the liver against toxins and to control chronic liver diseases. Recent experimental and clinical studies suggest that milk thistle extracts also have anticancer, antidiabetic, and cardioprotective effects. Silymarin and its active constituent, silybin, have been reported to work as antioxidants scavenging free radicals and inhibiting lipid peroxidation. 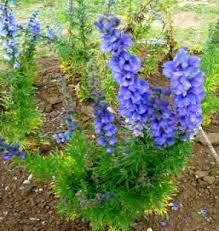 4. Aconitum chasmanthum (Gaping Monkshood, mohri) is found in the meadows of the Himalayas, from Pakistan to Nepal, at altitudes of 2300 – 4300 m asl. The whole plant is highly toxic and even skin contact causes numbness in people. The main alkaloid of these plants is aconitine, a highly toxic diterpenoid alkaloid, which is known to suppress the inactivation of voltage-dependent Na+ channels by binding to neurotoxin binding site 2 of the α-subunit of the channel protein. These alkaloids are highly cardiotoxins and neurotoxins. Severe aconite poisoning can occur after accidental ingestion of the wild plant or consumption of an herbal decoction made from aconite roots. In traditional Chinese medicine, aconite roots are used only after processing to reduce the toxic alkaloid content. The dried pulverized roots are mixed with butter and given as ointment on abscess and boils also mixed with tobacco and uses as “Naswar”. Soaking and boiling during processing or decoction preparation will hydrolyze aconite alkaloids into less toxic and non-toxic derivatives. However, the use of a larger than recommended dose and inadequate processing increases the risk of poisoning. 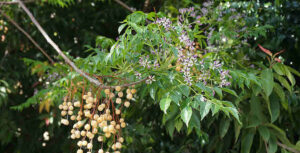 5. Melia azedarach (Chinaberry tree, Bakain) All parts of Melia azedarach tree are poisonous. Even eating as few as 6 berries can result in death of humans. Birds that eat too many seeds have been known to become paralyzed. Also, its bark and fruit extract is used to kill parasitic roundworms. In Manipur, its leaves and flowers are used as poultice in nervous headache. Its leaves bark and fruit are also used as insect repellant. Its seed-oil and wood-extract is used in rheumatism and asthma, respectively. Toxicity and pathological studies showed that the meliatoxins from M. azedarach are responsible for most but not all of the symptoms resulting from the ingestion of whole fruit. In addition, limonoids from M. azedarach showed various biological activities like insecticidal, insect antifeedant and growth regulating activity on insects as well as antibacterial, antifungal, antimalarial, anticancer, antiviral and a number of other pharmacological activities on humans. 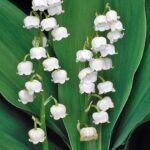 6. Convallaria majalis (European Lily of the Valley) it’s all parts are poisonous due to Cardenolides and saponins toxins. Cardenolides have a digitalis like activity and causing cardiac conduction disturbances. Few cases of animal poisoning reported in C. majalis, which contains cardiac glycosides (digoxin) due to immunologically cross-reactive compounds. 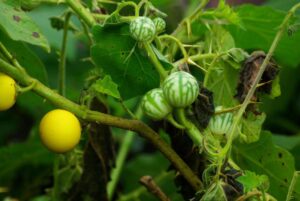 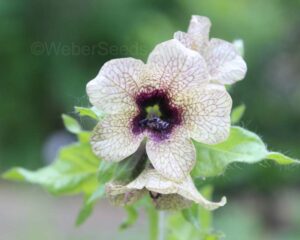 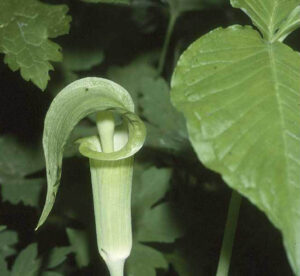 9. Arisaema triphyllum (Jack-in-the pulpit, Saapbhutta) is a poisonous plant. The toxicity of Arisaema species is due to its content of calcium oxalate, a compound derived from oxalic acid, as well as enzymes that trigger the release of histamine in the blood stream of persons who ingest the leaves. Needle like calcium oxalate crystals causes painful oropharyngeal edema, hypersalivation, aphonia, oral ulceration, esophageal erosion, and hypocalcemia upon contact with lips, tongue, oral mucosa, conjunctiva, or skin. 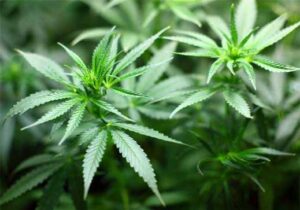 10. Cannabis sativa (Marijuana, Hemp, bhang) has been used for centuries for the effects of its psychoactive resins. The term “marijuana” typically refers to tobacco like preparations of the leaves and flowers. The plant contains more than ~400 toxic chemicals. The cannabinoid, 9-tetrahydrocannabinol (THC) is the major psychoactive toxic constituent. “Hashish” is the resin extracted from the tops of flowering plants and generally has a much higher THC concentration that has been widely used as psychoactive effects