Tablets are a solid dosage form of medicaments with or without excipients which are prepared by compression or moulding method and intended for oral administration for local and systemic effect. They may vary in its size shape and weight depending on the medicament and its mode of administration.

Why there is a need to perform Quality control tests for tablets?

Here are the reasons to test quality control for tablets

What is Quality control?

Quality control is a small part of QA and it is concerned with sampling,testing and documentation during manufacturing and also after completion of manufacturing.

It is the monitoring process through which manufacturer measures actual quality performance,compares it with standards and find out the causes of deviation from standard to ensure quality product not once but every time.

In general terms,Quality control refers to a procedure or a set of steps taken during the manufacturing of a product to ensure that it meets requirements and that the product is reproducible.

Colour: Many pharmaceutical tablets use color as a vital means of rapid identification and consumer acceptance. The colour of a product must be uniform within a single tablet.Non- uniformity is referred to as ‘mottling’ and hence it leads to poor quality of product.

Odour: The presence of odor in a batch of tablets could indicate stability problems, such as the odor of acetic acid in degrading aspirin tablets. However, the presence of an odor could be characteristic for the drug (vitamins), added ingredients (flavoring agents) or the dosage form (film-coated tablets).

Note: As per official standard,tablet thickness variation alloted upto (+ or -) 5% of standard value.

This test is also known as “Crushing Strength Test”. Tablets require a certain amount of strength, or hardness to withstand mechanical shocks of handling in manufacture, packaging and shipping. Tablet hardness has been defined as the force required to break a tablet in a diametric compression test. The hardness is measured in Kg/cm2.

“FRIABILITY is the phenomenon where the surface of the tablet is damage or shown a site of damage due to mechanical shock.” The purpose of frability test is to evaluate the ability of the tablets to withstand the breakage during the transportation and handling.

Friability testing is a method, which is employed to determine physical strength of uncoated tablets upon exposure to mechanical shock and attrition. In simple words, friability test tells how much mechanical stress tablets are able to withstand during their manufacturing, distribution and handling by the customer. It means Surface Erosion by certain mechanical shock and lost of material from intact tablet.

Disintegration is a process in which tablets are break up into granules or smaller particles. The time it takes a tablet to disintegrate is measured in a device described in the USP/NF.So, disintegration test is a measure of the time required for a group of tablets to break up into particles under a given set of conditions.

This test is essential for tablets intended for administration by mouth, except those intended to be chewed before being swallowed or those that should dissolve slowly in the mouth, e.g., lozenges, glyceryl trinitrate, or effervescent tablets. Also, disintegration does not apply to some types of sustained- release tablets.

Apparatus construction: Two batches of six tablets can be simultaneously tested with this instrument. The USP device to test disintegration uses 6 glass tubes that are 3 inches long,open at the top,and held against a 10-mesh screen at the bottom end of basket rack assembly.Each glass tube has percolated sieve (no.10) at the bottom. 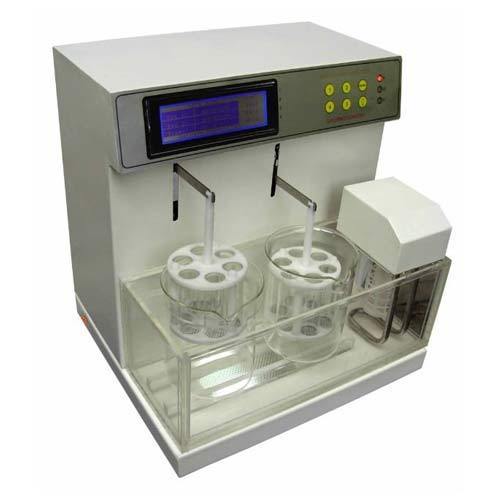 The administration of drugs via oral dosage forms is one of the most common and effective means of delivering treatments to patients. When a dosage form is swallowed, the rate at which it releases the active ingredient is critical to ensure that the drug is delivered properly. The rate at which the drug is released is called the dissolution rate.

Content uniformity test was developed to ensure content consistency of active drug substances. The USP method, 30 tablets are randomly selected, 10 of these tablets are assayed individually according to the method described in the individual monograph. Unless otherwise stated in the monograph, the requirements for content uniformity are met if the amount of active ingredient in nine (9) of the ten (10) tablets lies within the range of 85% to 115% of the label claim.

The tenth tablet may not contain less than 75% or more than 125% of the labelled drug content. If one or more dosage units do not meet these criteria, the remaining 20 tablets are assayed individually and none may fall outside of the 85% to 115% range for the batch to be accepted.

Quality control of tablets involves various tests which require keen attention. To ensure that established product quality standards are met, these tests must be performed during production (in process control) and verified after the production of each batch.

DDA Notice Regarding False and Misleading Propaganda of Medicines