Opioid analgesics are drugs that denote all naturally occurring, semisynthetic and synthetic drugs, which have a morphine-like action, namely, relief from pain and depression of CNS associated with the drug dependence. Opium is a dark brown resinous material obtained from the poppy (Papaver somniferum) capsule. It has two types of alkaloids; Phenanthrene derivatives and Benzoisoquinoline derivatives. Opium has been known from 1500 BC. Sreturner, a pharmacist isolated the active principle of opium in 1806 and named it morphine. Narcotic analgesic agents cause sleep in conjunction with their analgesic effect. If a narcotic is used for a long time, it may become habit-forming (causing mental or psychological dependence) and physical dependence may lead to withdrawal side effects.

Opioid drugs are not only used as analgesics, but also possess numerous other useful properties. For example, morphine is used to induce sleep in the presence of pain, diarrhoea, suppress cough, and facilitate anaesthesia.

The term opioid is used generally to designate collectively the drugs, which bind speciﬁ cally to any of the subspecies of the receptors of morphine and produce morphine like actions. They tend to produce euphoria, which is an important factor in their addictive property that limits their use. Other limitations include, respiratory depression, decreased gastrointestinal motility leading to constipation, increased biliary tract pressure, and pruritis due to histamine release.

SAR of Morphine was studied by 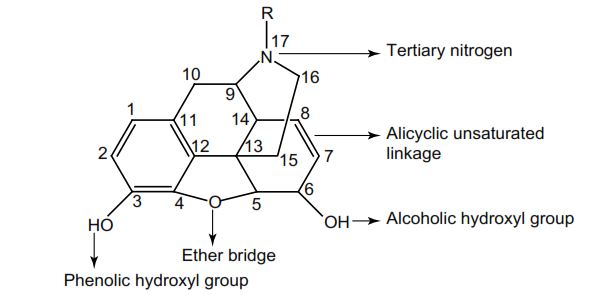 Summarized SAR of Morphine Analogues is given below: 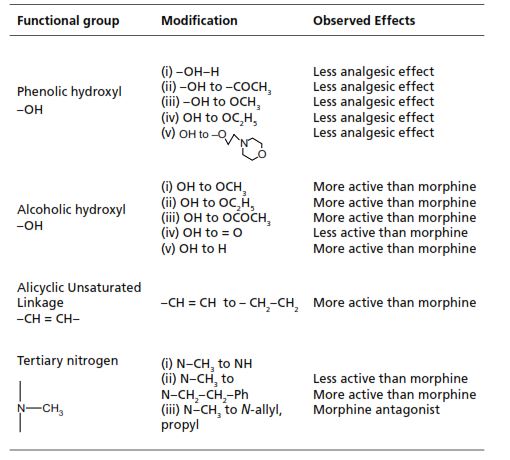 Join us on Facebook for Pharmacy Information and Opportunities: Pharma Info Nepal

List of Hospitals Where Senior Citizens Get Free Treatment

Why is a Separate Manufacturing Facility Required For Penicillin And Non Penicillin Products ?

A Guide to Stability Storage

List of Hospitals Where Senior Citizens Get Free Treatment